Eighteen States and the District of Columbia now allow NPs to practice independently. Connecticut being the most recent. As four decades of outcome research in primary care has shown, NPs provide safe, high-quality care. These are not straight out of school NPs practicing independently. Depending on the State it can only happen after gaining 2-4 years (approx 4200-8300 hours) of experience working in collaboration with a physician. Yes, there will be a few NPs able to become independent right away, but most will stay working in their current positions and with physicians. 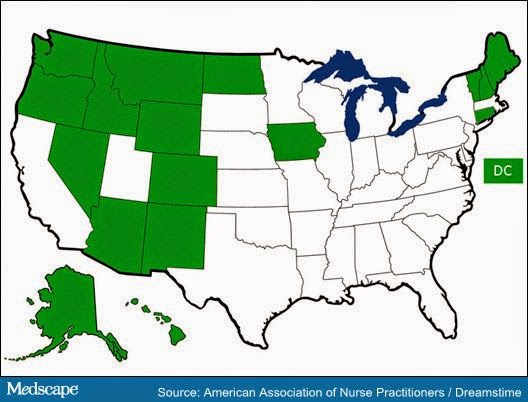 The West seems to be more progressive in this matter, but the East will catch up. It's a tough fight with the National and State chapters of the AMA, a few think only doctors are qualified to diagnosis and treat patients. California tried to pass an NP bill last year, but the California Medical Association spent a lot of money and it failed. It usually takes a few tries to pass these types of things.

But what's happening in the South and not one State. I worked in Florida as an RN, and understand the good old boys club (FMA), with their large membership of retired and semi-retired doctors not wanting to give an inch to NP independence. But as for the rest of the south, this is the stroke belt and a recognized area of health problems, in addition to a shortage of primary care practitioners. NPs need to get together and organize because patients need you, but expect a smear campaign from your state medical association
Posted by NPO at 12:22 PM

Don't we know it! Florida was so close this time to actually having the Senate vote, but once again... Dud... I will continue writing my Senators and House Reps during the next year and hope for the best. So frustrating!